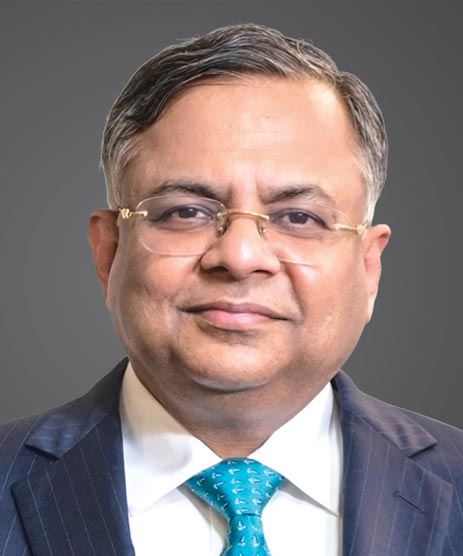 His appointment as Chairman followed a 30-year business career at TCS, which he joined from university. He rose through the ranks at TCS to become CEO and Managing Director of the leading global IT solution and consulting firm.

In addition to his professional career at Tata, Mr. Chandrasekaran was also appointed as a Director on the Board of India’s Central Bank, the Reserve Bank of India, in 2016. He has also served as the Chairperson of the Information and Communication Technology Industry Governors at the World Economic Forum, Davos in 2015-16.Chandra is an active member of India’s bilateral business forums including USA, UK, Australia and Japan. He served as the chairman of NASSCOM, the apex trade body for IT services firms in India in 2012-13.

Mr. Chandrasekaran has received several awards and was honoured with the ’Business Leader Award’ at the Economic Times Awards for Corporate Excellence 2016. He was voted the ‘Best CEO’ at the 2015 All-Asia Executive Team rankings for the fifth consecutive year in 2015. He was awarded the Frans Banninck Cocq Medal from the City of Amsterdam for promoting trade and economic relations between The Netherlands and India. Mr. Chandrasekaran has been conferred honorary degrees and doctorates by several universities in India and abroad including KIIT University (2012), SRM University (2010) and Nyenrode Business Universiteit in the Netherlands, among others.He attended the Regional Engineering College, Trichy, Tamil Nadu, where he completed a Master’s degree in Computer Applications before joining TCS in 1987.