Media CoverageTata Motors develops its most powerful truck ever
Share

Tata Motors develops its most powerful truck ever 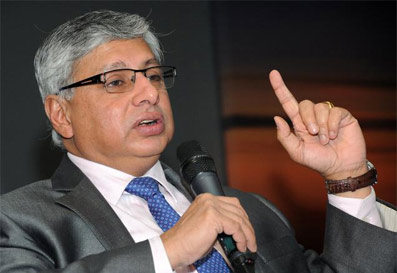 Tata Motors has developed its most powerful truck ever which will be on display at the Buddh International Circuit near Delhi this week.

"The 1000 bhp Prima will be a showpiece during the T1 Prima Truck Racing Championship. If all goes well, it will be the vehicle which we can sell abroad. I will leave it at that,” said Ravi Pisharody, Executive Director, Commercial Vehicles, Tata Motors, in a recent interview.

The fourth edition of T1 will see 400 bhp Primas belt the race track on Sunday in what is expected to be a high voltage event. Two prototypes of the 1000 bhp Prima will be on display at the event to showcase the prowess of the Tata Motors engineering team in Jamshedpur which worked for over a year on making this a reality.

"I don’t want to promise that two years down the line, we will have such powerful trucks performing in Europe. All I can say is that it is a possibility since this 1000 bhp Prima will not be in any way inferior to European trucks,” added Pisharody. The T1 event is also the best time to display this all-powerful truck since international distributors will be present at Buddh and would be inclined to getting it across to other race circuits in the coming years.

While the 1000 bhp Prima is bound to be a showstopper, all the action will be happening on the track with its 400hp siblings. Over the last three years, the T1 has been such a resounding success that Tata Motors believes the concept is here to stay. The attendance at Buddh has also grown from 25,000 people in 2014 to twice as much in the following years with 2017 expected to set new records.

This edition will have truck racers from Europe participating in addition to the traditional British lineup. It is also for the first time that there will be a woman racer, Stephanie Halm of Germany, competing in an all-male bastion. In addition, it is the second year where there will be Indian drivers racing on the track too. "Many of them have seen the success of 12 of their colleagues racing last year. We have now expanded the the net to get more entries from the south, west and east,” said Pisharody.

The Indian drivers went through the training programme at the Sriperumbudur race track near Chennai to get used to the idea of handling a 400 bhp Prima at high speeds. During the six weeks of training, Tata Motors’ customers and dealers in Tamil Nadu also visited the site to watch and experience the action on the track. These people represent a new generation of fleet owners who would like to be associated with a modern brand like Prima.

"Last year we were not sure about the Indian racers, so we brought them into two groups of six each. Now we are going to give them exclusively a full race. From our point of view, it is about creating self-esteem for the driver community that we cannot measure in number of trucks sold,” added Pisharody.

With T1 gaining popularity in India where the concept of truck racing has clearly struck a chord, it remains to be seen if Tata Motors will take this to other parts of the world. The 1000 bhp prototype that will be displayed may perhaps pave the way for an entry into Europe where truck racing is already popular.

"The reason we are holding back is that in India, Tata is a big brand but we are still not there in some of the other markets. In those countries where we are investing in the brand, there could be a couple where it is not out of place to say that T1 could make an appearance,” said Pisharody. For the moment, Korea, Indonesia, the Middle-East and Africa could be possible hunting grounds to replicate the India T1 experience with 400 bhp trucks.