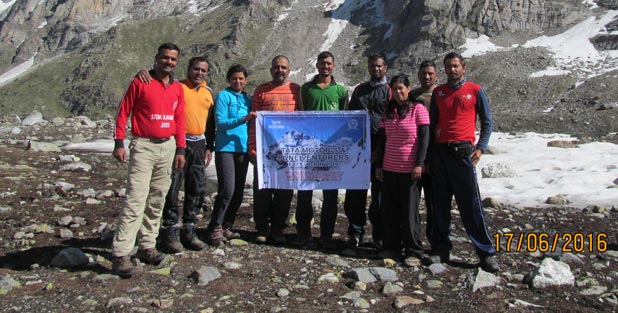 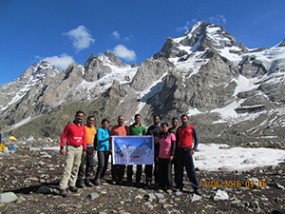 The Base camp was set at 14,500 ft. and the summit camp at 19,600 ft; and over 9000 ft., the rope was fixed to make the climb possible. The excursion saw trekkers scaling through an 80-degree steep mountain with a combination of blue Ice, rock, snow, with a risk of dangerous hanging ice in extreme climatic conditions. Scaled at a height of 6221 meters, the team studied and analysed the Mt. Indrasan peak for three years before setting off on the expedition.

Tata Motors Limited is India’s largest automobile company, with consolidated revenues of INR 2, 75, 561 crores (USD 41.6 billion) in 2015-16. Through subsidiaries and associate companies, Tata Motors has operations in the UK, South Korea, Thailand, South Africa and Indonesia. Among them is Jaguar Land Rover, the business comprising the two iconic British brands. It also has an industrial joint venture with Fiat in India.  With over 9 million Tata vehicles plying in India, Tata Motors is the country’s market leader in commercial vehicles and among the top in passenger vehicles. Tata cars, buses and trucks are being marketed in several countries in Europe, Africa, the Middle East, South Asia, South East Asia, South America, Australia, CIS and Russia.