Commenting on the association, Mr. Vivek B Srivatsa, Head-Marketing for Passenger Vehicle Business Unit (PVBU), Tata Motors Ltd said. "Rock On 2 is about every generation finding its voice and now with the new HEXA, every generation will find its drive. We believe that our association with Excel Entertainment for Rock on 2 is compelling, relevant and thus complements the core movie communication. Rock On 2 portrays the beauty of music which is craved by every generation; much similar to the HEXA which appeals to customers for its CONNECTNEXT Infotainment system and overall driving capabilities"

Rock On 2 paints a canvas much larger than the iconic first part; Rock On. At the heart of the story comes an ideology about music; something that cannot be nurtured in a competitive environment, it comes from the heart, connects people and breaks barriers across genres, regions and personal gains. Displaying younger generation through new sounds and tunes which could go on to become the melody of a new India. 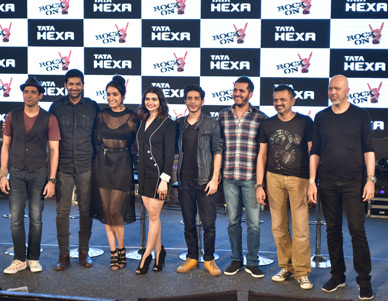 Commenting on the association Excel Entertainment said "We are delighted to associate with Tata Motors for Rock On 2. The journey has been tremendously exciting for us, with the partnership going to be a win-win situation for both brands. We hope to associate on future projects as well".

Slated to hit theatres worldwide on November 11, 2016, Rock On 2 will also feature a range of vehicles from Tata Motors, including the Safari Storme and Xenon. In addition to on-screen, Tata Motors’ association with ‘Rock On 2 ‘seamlessly flows into the off-screen arena entailing a series of initiatives including the ‘Carpool Karaoke’ across social media platforms, alongside exciting customer engagement activations, with the star cast.

Tata Motors is at a defining juncture in its evolution as it gears up to disrupt the passenger vehicles’ industry with path-breaking offerings. The offerings given to consumers with innovative marketing is an equally important area of focus for the company. Taking its marketing strategy to the next level, Tata Motors will continue to create fascinating communication campaigns for the business and its brands to connect with its customers innovatively.