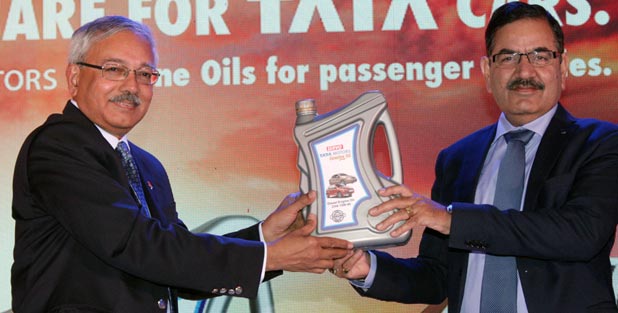 According to Mr. Dinesh Bhasin, Head, Customer Support, Passenger Vehicle Business Unit, Tata Motors Ltd., "We at Tata Motors aim to deliver excellent post purchase experience. We are glad to have partnered with SERVO from Indian Oil in developing this extensive range of SERVO Tata Motors Genuine Oils for our passenger vehicles which would ensure trouble free performance of the vehicles for a longer span. With this new range of oils, we are dedicated towards providing the best lubricant technology expertise and support in today’s competitive market place".

According to Mr. K.L. Murthy, Executive Director (Lubes) IndianOil, "It’s been our privilege to associate with Tata Motors, a trusted name in the Indian motor industry over several decades. Having tied up already as a Genuine Oil supplier for commercial vehicles from Tata, it has only been a natural step forward to become a Genuine Oil partner for the rapidly growing segment of passenger vehicles from Tata Motors. We are launching a vast array of SERVO Tata Motor Genuine Oils that would provide complete lubrication care for vehicles and derive peak efficiency out of them."

The SERVO TMGO has been formulated and blended from high quality base oils and additives, providing enhanced engine performance through excellent deposit control and wear protection. The oils conform to international performance specifications and standards.

SERVO is the largest selling brand of lubricants in the country and is backed by the cutting-edge R&D facility of IOCL which has over 300 international patents in lubrication and petroleum technologies. It is the key brand from the stable of IOCL which is the leading Indian company in the Fortune Global 500 listing. It is emerging as a truly global lubricant brand with footprints in over 25 countries and counting. SERVO also possesses tremendous logistic advantage of extensive national reach provided by Indian Oil’s retail network even in the remotest parts of the country, with over 50,000 customer retail points. SERVO has a mammoth marketing channel of over 24,000 fuel stations and thousands of bazaar counter besides an array of Institutional customers including industrial, government and defense establishments across the nation, served either directly or through SERVO Stockists Automotive and Industrial.

These products will be made available through our retail distributor network consisting of 24000 IOC retail outlets and over 35000 bazaar counters across India.

Tata Motors Limited is India’s largest automobile company, with consolidated revenues of INR 2,62,796 crores (USD 42.04 billion) in 2014-15. Through subsidiaries and associate companies, Tata Motors has operations in the UK, South Korea, Thailand, South Africa and Indonesia. Among them is Jaguar Land Rover, the business comprising the two iconic British brands. It also has an industrial joint venture with Fiat in India. With over 8 million Tata vehicles plying in India, Tata Motors is the country’s market leader in commercial vehicles and among the top in passenger vehicles. Tata cars, buses and trucks are being marketed in several countries in Europe, Africa, the Middle East, South Asia, South East Asia, South America, Australia, CIS and Russia.

As India’s flagship national oil company, Indian Oil has been meeting India’s energy demands for over half a century. With a corporate vision to be ‘The Energy of India’  and to become ‘A globally admired company,’ Indian Oil’s business interests straddle the entire hydrocarbon value-chain – from refining, pipeline transportation and marketing of petroleum products to exploration & production of crude oil & gas, marketing of natural gas and petrochemicals, besides forays into alternative energy and globalisation of downstream operations.

Having set up subsidiaries in Sri Lanka, Mauritius and the UAE, the Corporation is simultaneously scouting for new business opportunities in the energy markets of Asia and Africa. It has also formed about 20 joint ventures with reputed business partners from India and abroad to pursue diverse business interests.