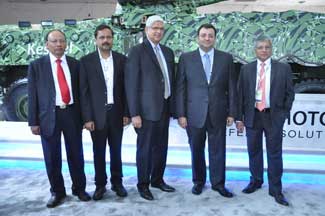 Tata Motors, the country’s leading supplier of mobility solutions to the armed + security forces, today showcased two new combat vehicles at the DEFEXPO 2014.  As part of the company’s strategy to enhance the scope of its defence business right up to frontline combat, Tata Motors showcased the ‘KESTREL’, a Wheeled Armoured Amphibious Platform providing mobility to frontline soldiers, carrying them into the battle zone, with critical armour-protection, backed with adequate fire support. The ‘LAMV’ (Light Armoured High Mobility Vehicle) is a recon vehicle moving ahead of the armored columns. Tata Motors Defence through the KESTREL and the LAMV provides the Indian Armed Forces, with world-class indigenously developed front line protected mobility.

The KESTREL is a Wheeled Armored Amphibious Platform, designed and developed indigenously with DRDO, for optimised survivability, all-terrain performance and increased lethality. The occupant capacity of the hull is 12 members. The driver in combat mode has visibility through 3 periscopes and a display catching vision through front and rear view cameras, with day and night vision. The back to back seating layout allows firing through the 3 gun ports on each side, with two big hatches for patrolling. The fuel tanks are placed outside the crew compartment for additional safety. The 8X8 independently suspended vehicle has high power-to-weight ratio for mountain terrains. The vehicle can accommodate different variety of weapon stations and turrets as the application demands.

The LAMV is developed indigenously with technical inputs from Supacat of the UK, for vital reconnaissance mobility, protection and firepower. A light patrol vehicle, the LAMV combines an integrated blast and ballistic protection system, including a protected all composite detachable crew pod and V-shaped hull, providing an all-round protection. Carrying a crew of six (two+four) and using the latest composite and ceramic armour systems, the crew pod is constructed as a separate module, sealed off from potential secondary projectiles. All seats are mine-blast protected. The LAMV has exceptional all-terrain high mobility performance, high power-to-weight ratio, automatic transmission, all-wheel independent suspension and can reach speeds of upto 105 kmph. The vehicle is also loaded with modern equipment for observation, surveillance and communication, configured to also address urban warfare, engaging threat on all terrains.

Mr. Ravi Pisharody, Executive Director, Commercial Vehicle Business Unit, Tata Motors Ltd, "Tata Motors has been associated with the country’s defence and security forces for over 60 years, supplying a range of world-class, high technology and reliable off-road mobility solutions. While focusing on the modernisation and system upgrades of the country’s mobility platforms, we have strategically moved from being a logistics support provider to a frontline combat vehicle player. The two vehicles showcased today are state-of-the-art, targeted at giving our forces the much needed capabilities of strategic mobility for rapid offensive thrusts into enemy territory. Developed with DRDO, the KESTREL is based on modern modular designs, which can incorporate imperative upgrades, thereby enabling them to retain functional superiority throughout their service life."

Tata Motors also showcased two other vehicles at the DEFEXPO 2014.

Tata 7.5 T MRV on LPTA 1623 4×4 BSIII: Tata Motors showcased a 7.5 tonne, hydraulic Medium Recovery Vehicle (MRV) on the LPTA 1623 4×4 BSIII platform. Developed indigenously by Tata Motors along with PLS Limited, the MRV is the first of its kind OEM manufactured vehicle, enabling ease of operation and readiness at all times. The Tata 7.5 T MRV enables speedy recovery and repair of vehicles in the 7 – 10 class, and gets them on road in time to ensure smooth sustenance to the operational tasks in hand. The Tata 7.5 T MRV caters to operational requirements such as extrication of vehicles, suspended tow unditiching / uprighting of vehicles, loading / unloading of various categories of load, etc.

Tata Armoured Personnel Carrier (APC) Left Hand Drive (LHD): The Tata APC – LHD, has been developed specifically for LHD markets to protect security forces from threats like ambushes, sudden violent attacks and powerful explosive mines. Tata APC takes troop protection to the next level. Designed to protect against gunfire, with ballistic protection of NIJ Level III, it provides essential protection to military and para military forces. It is well protected against under wheel / underbelly blasts and has more than acceptable levels of mobility.

Tata Motors has been associated with the country’s off-road defence and security forces, since 1958 and has supplied over 100,000 vehicles to the Indian military and Paramilitary forces, so far. The company offers its products and services that not only meet the needs of the domestic market, but are also positioned to meet most stringent requirements across the world. Tata Motors exports its range of specialized defence vehicles to the SAARC, ASEAN and African regions. With Tata Motors rich portfolio in multi-axle range like 12×12, 8×8 & 6×6, the company has started supplying to leading Missile OEMs across the world. The company has established itself as a supplier of specialist vehicles for UN peacekeeping missions. Tata Motors range of off-road vehicles are also being procured by the agencies, involved in AID & Development, across the world like GSA, KBR, Oxfam, RONCO, RA International & Riders. The company also has the ability to mobilize adequate manufacturing capacity for defence requirements, along with dedicated exclusive infrastructure, manufacturing facilities and trained manpower, to ensure faster delivery of its defence vehicles. It gives high priority to defence vehicles through a 24X7 contact centre, with dedicated service team only for Defence vehicles.

Tata Motors is India’s largest automobile company, with consolidated revenues of Rs. 1, 88,818 crores ($ 34.7 billion) in 2012-13. Through subsidiaries and associate companies, Tata Motors has operations in the UK, South Korea, Thailand, South Africa and Indonesia. Among them is Jaguar Land Rover, the business comprising the two iconic British brands. It also has an industrial joint venture with Fiat in India.  With over 8 million Tata vehicles plying in India, Tata Motors is the country’s market leader in commercial vehicles and among the top in passenger vehicles. It is also the world’s fifth largest truck manufacturer and fourth largest bus manufacturer. Tata cars, buses and trucks are being marketed in several countries in Europe, Africa, the Middle East, South Asia, South East Asia, South America, CIS and Russia.